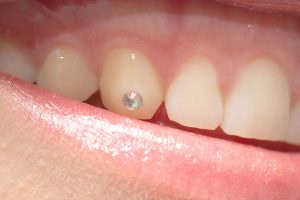 Everyone strives for a dazzling smile, but an increasing number of people want to bedazzle their smile with grillz, gems, and tooth tattoos. Fashion icons like Hailey Baldwin and Katy Perry and rap artists such as Kanye West and Lil Wayne lead the way in spurring the tooth fashion trend forward.

At Stensland Dental Studio, we previously wrote an article about the dangers of tooth gems that was met with tremendous interest. As a business whose purpose is to care for people’s teeth, we feel it’s our duty to continue this conversation about the risks of these tooth fashion trends. In this article, we’ll take a look at grillz, gems, and tooth tattoos in detail to equip you with the knowledge needed to make responsible dental decisions.

Are Grillz Harmful for My Teeth?

Rappers and other members of the hip-hop community continue to sport grillz as a fashion statement. But what are these metallic pieces of jewelry that are now adorning public personalities’ and non-celebrities’ smiles alike? Grillz are metallic covers that generally snap over top of the wearer’s existing teeth, but some grillz are permanently embedded in the mouth. Typically either gold or silver, grillz also come in jewel-encrusted varieties for those wanting extra bling. Some grillz shops offer custom-fitted grillz, but generic grillz can also be ordered online.

As mentioned in our previous article, grillz can cause serious allergic reactions and wear away tooth enamel. Enamel erosion causes irreversible high sensitivity and discoloration. Also,  if you remember back to your orthodontic retainer days, grillz inhibit your ability to speak clearly.

The primary concern with wearing grillz is dental hygiene. These pieces of jewelry require basically the same care as an orthodontic retainer. You must remove them before eating and brush your teeth before re-inserting them. If this sounds like a hassle, that’s because it is rather inconvenient. However, this process is necessary, because if you eat with grillz in or don’t brush before putting them back in, you greatly increase the rate at which plaque and other bacteria builds up in your mouth. The result? Bad breath, stained teeth, and infected gums. For some reason, Nelly didn’t mention those side effects in his song entitled — you guessed it — “Grillz.”

What are the Risks of Tooth Gems?

People interested in dabbling in tooth fashion often initially opt for a tooth gem over grillz. Tooth gems are less noticeable and are not viewed as “hardcore” as a full set of grillz. Tooth gems come in various shapes, sizes, and colors and can be applied to whichever tooth is desired. While some tooth gem technicians actually drill a hole in the tooth in which to set the jewel, most use an adhesive similar to what is used to apply orthodontic braces.

Even though tooth gems are less intrusive than grillz, they are not without their own set of risks. Tooth gems can last anywhere from a few weeks to over a decade. The longer a tooth gem stays on a tooth, the greater the risk that it will leave behind discoloration. Tooth gems can also wear away enamel and collect food particles, causing sensitivity and infection.

Tooth tattoos are a bit of a misnomer, as they do not involve injecting any colored pigment into your teeth. Rather, they are crowns or veneers painted with pictures, designs, and logos. After the tooth tattoo recipient is fitted for the crown, an artist paints the crown with the desired image. The crown is then baked to set in the image. Dentists may remove the image by buffing it off with a polishing tool.

Tooth tattoos inherently present no dangers to the wearer when the dental patient already needs a crown. Adding a tattoo to a crown simply requires an additional financial investment. However, tattooing a perfectly healthy tooth involves unnecessarily grinding it down so that it may be fitted with a crown. A dentist who condones this procedure jeopardizes their credibility because it is not in the best interest of the patient’s short-term and long-term oral health. On the bright side, if you decide to remove your tattooed crown, you’ll fit right in with the Twilight fans who had their teeth filed down to resemble a vampire’s canines.

Is the Tooth Fashion Trend Growing?

According to Google Trends, tooth fashion is on the rise, but not to the degree that popular media suggests. Over the past decade, interest in tooth fashion experienced only a gradual increase, with the exception of grillz in 2005 and 2006 following the release of the song “Grillz” by Nelly. Grillz, gems, and tooth tattoos will likely remain isolated to trendsetters and to those in the limelight.

Call us old fashioned, but at Stensland Dental Studio, we only promote natural and clean pearly whites. The comprehensive dental services we offer aim to maintain or restore the inherent beauty of your smile. While we do not buy into the tooth fashion trend, we absolutely work with patients to restore their smiles from tooth fashion incidents gone wrong. If you have questions about how to revitalize your smile from grillz, gems, or tooth tattoos, contact Stensland Dental Studio today!